Long said he believed that with the Vietnamese government’s strict and effective policies in fighting the pandemic, as well as the consensus and support of the Vietnamese people and international friends, the country would soon bring COVID-19 under control.

For its part, Rhein emphasized the traditional friendship between the state of Hesse and Vietnam, with the Vietnam-Germany University (VGU) being a beacon project for the sides. Both sides would have looked out for and helped each other in difficult times.

When Germany faced a shortage of face masks in early 2020, the Vietnamese people promptly presented the European country with more than 100,000 masks, he recalled. 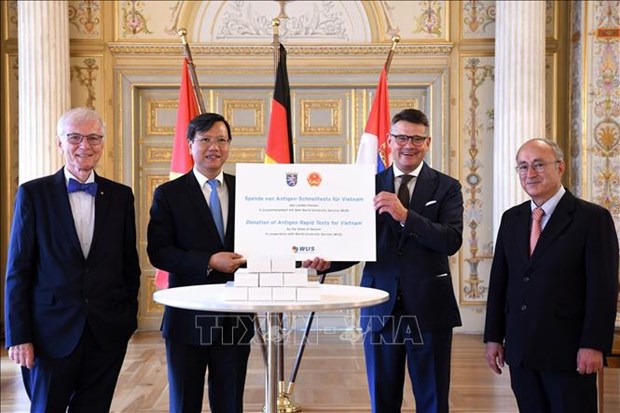 Rhein took the opportunity to meet Dr. Kambiz Ghawami, Executive Chairman of the non-governmental organization World University Service (WUS), for the connection of the aid services; and the national airline Vietnam Airlines for the free transport of aid to Vietnam.

The Messer Group, which specializes in industrial gases, has been active in Vietnam for almost 25 years, with six plants and two more being planned.

Ghawami previously called on all 16 German federal states to support Vietnam in the fight against COVID-19. The first aid delivery with over 190,000 test kits from the states of Bremen, Hamburg, Mecklenburg-Western Pomerania and Saxony-Anhalt arrived in Vietnam at the end of June.

First COVID-detectable dogs in the US